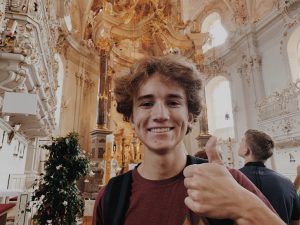 During 2018–19 school year, along with other accomplished music students across the United States and overseas in military base schools, Max O’Reilly practiced with dedication to gain a chair in his local, district, and state honor choirs.

Max O’Reilly likes to sing. He has been selected as a member in the Utah All State Choir the past three years. This summer, he was given the opportunity to sing in Europe with the Utah Ambassadors of Music. Max feels incredibly lucky to have the privilege to participate in all of these programs, and would like to thank Ms. Abbott and his parents for making it possible.

Selected students will be rehearsing a challenging repertoire in preparation for performing under the direction of one of the most prominent conductors in the United States: Tesfa Wondemagegnehu. The concert will take place November 9th at 7:00 PM at the Gaylord Palms Resort and Convention Center in Orlando, Florida.